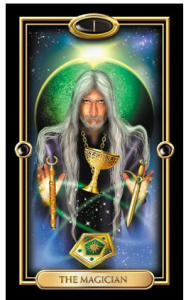 The Magician is the archetype of the active, masculine principle – the ultimate achiever. He symbolizes the power to tap universal forces and use them for creative purposes. Note his stance in the picture. He acts as a lightning rod – one arm extended up into the Divine for inspiration, the other pointing toward Earth to ground this potent energy.  His abilities appear magical at times because his will helps him achieve what seem to be miracles.

What makes the Magician so powerful? First, he is not afraid to act. He believes in himself and is willing to put that belief on the line. He also knows what he intends to do and why. He doesn’t hesitate because he understands his situation exactly. The Magician can focus with single-minded determination. As long as he remembers the divine source of his power, the Magician remains the perfect conduit for miracles.

In a reading, the Magician implies that the primal forces of creativity are yours if you can claim your power and act with awareness and concentration. This card is a signal to act and act now, provided you understand exactly what you want and are committed to getting it.