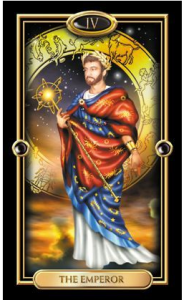 The figure of the Emperor says much about the essential qualities of this card. We see a stern, commanding figure seated on a stone-slab throne. His back is straight, and his eyes meet ours directly. He is confident of his complete authority to rule.

The Emperor represents structure, order and regulation – forces to balance the free-flowing, lavish abundance of the Empress. He advocates a four-square world where trains are on time, games are played by rules, and commanding officers are respected. In chaotic situations, the Emperor can indicate the need for organization. Loose ends should be tied up, and wayward elements, harnessed. In situations that are already over-controlled, he suggests the confining effect of those constraints.

The Emperor can represent an encounter with authority or the assumption of power and control. As the regulator, he is often associated with legal matters, disciplinary actions, and officialdom in all its forms. He can also stand for an individual father or archetypal Father in his role as guide, protector and provider.