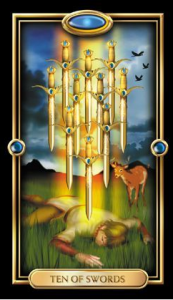 The Ten of Swords appears to be a card of terrible misfortune, but surprisingly, it often represents troubles that are more melodramatic than real. The man on this card has quite a few swords in his back. Wouldn’t one be enough? Isn’t ten a little excessive? Perhaps this gentleman’s suffering – though sincere – is exaggerated as well.

One meaning of the Ten of Swords is hitting rock bottom. When one disaster follows another, we feel devastated at first, but eventually we throw up our hands and laugh. It’s so bad, it’s funny! In films, the hero says, “What else could possibly go wrong?” and we know that’s a signal for the bucket of water to fall on his head. When you see the Ten of Swords, know that the last bucket has fallen, and you can expect a turn for the better.

This card can also show when you’re in victim mentality. You’re certain that the whole world is picking on you just to make your life difficult. I picture the man lifting his head and saying, “You think you’ve got it bad…a cut on the finger. I’ve got ten swords in my back…count ’em – ten!” Then he drops his head back down with a sigh. When we’re in victim mentality, we think everything is horrible, hopeless and impossibly unfair.

Being a martyr is also a favorite Ten of Swords activity. In this case, the man would say with a weak wave of his hand, “No…you go on. Have fun. Don’t think about me. I’ll just stay here with these swords in my back…but I want you to enjoy yourself.” Being a martyr in this sense is not the same as making a sacrifice for another with no strings attached. With the Ten of Swords, either is possible, but doing a good turn for someone else is more satisfying without the strings.

I don’t mean to make light of misfortunes because, of course, there are many real tragedies in the world. Sometimes the Ten of Swords indicates a sad event, but you know when this is the case. There is not even a hint of laughter in your heart. Most of the time the Ten of Swords has a lighter side. It is as if your Inner Guide is gently kidding you about how you are handling your own personal tale of woe. When you see the Ten of Swords, check your attitude and know you’ve reached the point where things will definitely begin to look up.