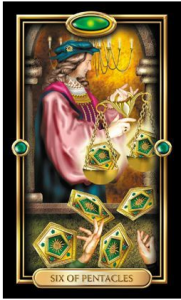 On this card, a well-to-do gentleman is tossing a few coins to a beggar while another supplicant waits to the side. The giver holds the scales of justice as if claiming the right to decide who deserves blessings and who does not. In this picture, we see both sides: what it means to give and to receive, to dominate and to submit, to be on top and to be on the bottom. It seems clear who has and who hasn’t, but is it? Life is not that simple, and how quickly fortunes change.

In readings, the Six of Pentacles asks you to look very deeply into the whole issue of what having really means both materially (resources) and immaterially (knowledge, power, love). You may see yourself on one side or the other, but this card asks you to reconsider. Think of the successful businessman who suddenly declares bankruptcy. The tyrannical invalid who dominates through weakness. The teacher who learns from her students. The parent who controls by giving money.

The keywords for the Six of Pentacles include both the have and have not sides of each meaning. Sometimes this card is a clear sign one way or the other. You will get the gift you want. You will have to defer to another. In all cases, though, you should question the obvious and go deeper. Why are you in the situation you’re in, and where is it leading? Who is really in charge? What’s really going on?