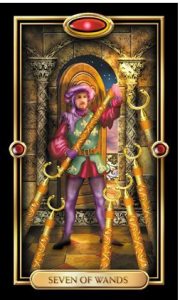 The Seven of Wands is all about taking a stand. Taking a stand is a forceful act that changes the energy flow of the world for good or ill. Most of the time we flow with our lives as if on a river. Events and feelings carry us forward with little effort. Sometimes, though, we are not content to drift. We want to resist the flow or change its course entirely!

The figure on the Seven of Wands appears to be in a battle. He’s either attacking or under attack, probably both. When we decide to take a stand, we set in motion an energy of resistance. When we take up a firm position, others do the same. The Seven of Wands stands for aggression and defiance because they are two sides of the same coin. You attack; your opponent defends. He counterattacks; you defend.

Some battles are worth fighting, others just cause trouble. If you are involved in a conflict, ask yourself if it’s worth the struggle. Is it important? Does it have value? Will the outcome serve you or others? If so, be bold and aggressive. Defend your position. Refuse to yield! If not, then consider letting the conflict go. Be honest with yourself about this. You will be tempted to hold onto your position, especially if you have invested much time and energy into it. Don’t let battle lines be drawn unless the war is worth fighting.

The Seven of Wands can also indicate strong convictions. In order to take a firm stand, you must believe in your position and yourself. You’ll need integrity and strength of character to see you through. If your cause is just, use the energy of the Seven of Wands to make a difference.

No matter what you are struggling with, Aeson is sure to be able to help. What are you waiting for, connect with Aeson NOW!

Is Aeson Available to Talk?