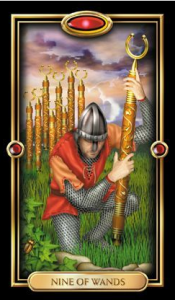 The figure on the Nine of Wands has definitely been through tough times. His head and arm are bandaged, and he’s leaning on a “crutch.” This fighter has seen some battles, but he’s still standing! He’s hurt, but he’s not down. When we have had a bad experience, we feel weary and battle-scarred. Even if we aren’t hurt physically, our psyches are wounded. Our openness, innocence and trust are gone, replaced by wary defensiveness.

In readings, the Nine of Wands can be a warning that you must proceed carefully. Keep a watchful eye because there is the possibility that you will be hurt. If you have already been burned, you know what this man is feeling. Life’s lessons can be hard sometimes, especially when hopes have been dashed. It is natural to feel defensive at such times but try to avoid becoming bitter. Your experience has wounded you, but it has strengthened you as well.

Strength is the other aspect of the Nine of Wands. This fighter is tough! He has the physical stamina and the inner drive to persist despite all setbacks. In the Terminator, Arnold Schwarzenegger plays an android from the future who never gives up. In the end, he is nothing but a wire framework with glowing eyes, but he still keeps coming – dragging himself along the floor to his goal. This is the spirit of the Nine of Wands. This card tells you to keep going no matter what. Even if everyone and everything seems to be against you right now, don’t give up. Within you are the hidden reserves you need to prevail.

No matter what you are struggling with, Aeson is sure to be able to help. What are you waiting for, connect with Aeson NOW!

Is Aeson Available to Talk?