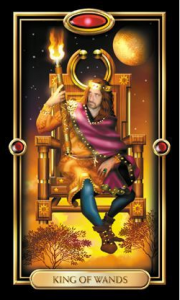 The personality of the King of Wands is a combination of the positive fire energy of the Wands suit and the active, outward focus of a King. He is creative and never settles for old, tired approaches. He trusts his originality and allows his inspirations to take form. He’s enthusiastic. He steps forward and takes the lead if the opportunity presents itself. Others follow when he shows them the way with confidence. He’s forceful in pursuing his goals. He’s not a quiet, passive observer unless that suits his purposes. He jumps in and creates results. He’s dramatic and exciting. This King is never a wallflower, more often the center of attention. He’s bold and daring. He avoids the safe, easy route because he has the energy and assurance to take risks and win. The King of Wands has the courage of his convictions and always believes in himself.

In readings, the King of Wands asks you to take the kinds of actions he might take. For example: creating a masterpiece, leading the way, taking a risk, or making a splash. This King can also represent a man or woman who is acting as he does, or an atmosphere of excitement, daring, and drama. In a reading, he tells you that his special energy has meaning for you at this time. Let yourself be inspired by this King in whatever form he appears in your life.